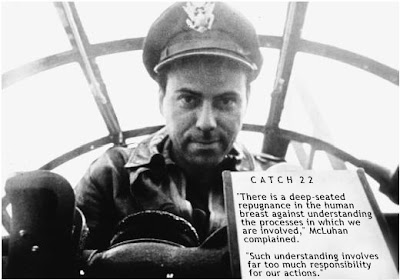 Within the book, "Catch-22" is a military rule, the self-contradictory circular logic that, for example, prevents anyone from avoiding combat missions. In Heller's own words:

There was only one catch and that was Catch-22, which specified that a concern for one's safety in the face of dangers that were real and immediate was the process of a rational mind. Orr was crazy and could be grounded. All he had to do was ask; and as soon as he did, he would no longer be crazy and would have to fly more missions. Orr would be crazy to fly more missions and sane if he didn't, but if he were sane he had to fly them. If he flew them he was crazy and didn't have to; but if he didn't want to he was sane and had to. Yossarian was moved very deeply by the absolute simplicity of this clause of Catch-22 and let out a respectful whistle.

Other forms of Catch-22 are invoked throughout the novel to justify various bureaucratic actions. At one point, victims of harassment by military police quote the MPs' explanation of one of Catch-22's provisions: "Catch-22 states that agents enforcing Catch-22 need not prove that Catch-22 actually contains whatever provision the accused violator is accused of violating." Another character explains: "Catch-22 says they have a right to do anything we can’t stop them from doing." The theme of a bureaucracy marginalizing the individual in an absurd way is similar to the world of Kafka's The Trial, and George Orwell's Nineteen Eighty-Four.

" In Catch-22, the figure of the black market and the ground of war merge into a monster presided over by the syndicate. When war and market merge, all money transactions begin to drip blood." - Take Today p.211 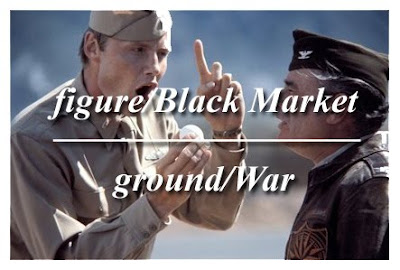 http://en.wikipedia.org/wiki/Milo_Minderbinder
Posted by quantum retrocausality at 10:04 AM