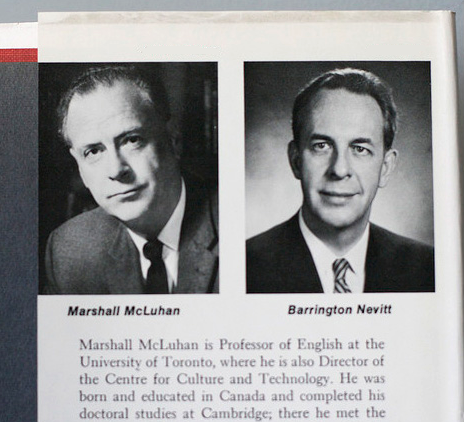 Throughout his life and career, as a professional engineer, international consultant, theorist, and linguist, Nevitt was associated with the phenomenon of modern communications. His interest in the theoretical aspects of mass media and communications resulted in a professional association and personal friendship with Professor Marshall McLuhan of the Centre for Culture and Technology, University of Toronto. In addition to being a prolific writer, who even experimented with science fiction, Nevitt was an international lecturer.
Nevitt was born in 1908 in St. Catharines, Ontario and spent his early years abroad, returning to Toronto from England in 1917. From 1920 to 1930, Nevitt was involved in the design, construction, operation, and maintenance of radio equipment. Nevitt was employed as a radio operator for the Canadian Marconi Company on coast and ship stations between 1927 and 1928. For a year, he served as a bush pilot in training with the Ontario Provincial Air Service. In 1932 Nevitt went to Leningrad to work as a research and development engineer at Zavod Elecktropibor where he assisted in the development of VHF measurement techniques. In 1933, Nevitt returned to Canada and worked with the Northern Electric Company in Montreal as a manufacturing engineer of telecommunication equipment, remaining with the company until 1939. During WWII, Nevitt worked on various sensitive projects at Canadian Pacific and Defence Communications Ltd, and as an engineer developing radio teletype systems at RCA. He remained with RCA as an executive engineer until 1947.
Nevitt received his Bachelor of Applied Science, Electrical Engineering, from the University of Toronto in 1941 and his Master of Engineering in Telecommunications degree from McGill University in 1945. From 1947 to 1960 Nevitt worked for the Swedish international public utilities firm L.M. Ericsson of Stockholm as a telecommunications troubleshooter in various locales including Caracas, Venezuela, and Rio de Janeiro, Brazil. In the early 1960’s, Nevitt served as a consultant to the Royal Commission for Government Organization, and returned to work for the Northern Electric Company and for other private and governmental bodies. In 1963, he joined the Ontario Development Corporation as a manager in research and consultative services, rising to become the corporation’s Director of Innovations.
Nevitt’s association with Marshall McLuhan began while he was a graduate student. From 1965 until McLuhan’s death in 1980, they wrote various articles and papers together. In 1968, McLuhan invited Nevitt to collaborate on the book later published under the title Take Today; the Executive as Drop Out. For more than a decade, Nevitt assisted McLuhan in the conducting of weekly seminars at the Centre for Culture and Technology.
Nevitt published several works throughout the later portion of his career including: ABC of Prophecy, (1982), The Communication Ecology (1982), Keeping Ahead of Economic Panic (1985), Who Was Marshall McLuhan ? (co-written with Maurice McLuhan 1993), and the self published science fiction work Captain Gulliver’s Interplanetary Travels.

Aphorisms, representing a knowledge broken, do invite men
to inquire farther; whereas Methods, carrying the show
of a total, do secure men, as if they were at farthest.
- Francis Bacon


Download a .pdf of Barrington Nevitt's " Visible and Invisible Bias Via Media "

Posted by quantum retrocausality at 11:49 AM

"Nevitt’s association with Marshall McLuhan began while he was a graduate student." LOL