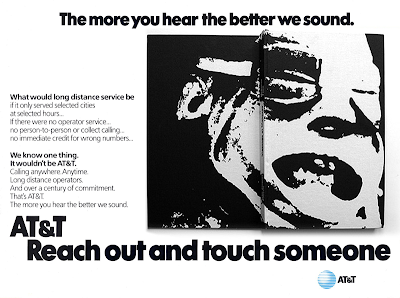 N.W. Ayer, one of America's oldest advertising agencies, needed a creative approach to help AT&T soften its image in the face of growing concerns about AT&T's potential monopoly. So Ken D'Ambrosio helped develop the concept for a print and TV campaign that incorporated the now famous "Reach Out and Touch Someone" tag line. We can credit Marshall McLuhan for creating the tagline "Reach out and touch someone" for Ma Bell. This campaign was designed to soften AT&T's image and position the company as an indispensable element of everyday American life.
"It's one of the great slogans of all advertising," said Neve Savage, vice president of marketing and communications for AT&T Wireless
---

the voice is the only medium that cannot be frozen; words disappear as soon as they are spoken. No freeze frame is possible, making the voice the only organic, living medium in the history of the species. The voice’s isolation from all the other senses, as we experience it on the telephone, highlights the fact of our most deprived sense: touch. It was from this principle that McLuhan created the tagline "Reach Out and Touch Someone" for AT&T in 1979. Thus, the analog phone call, and the human voice it represents, are the only possible way to retrieve someone who is trapped in the Matrix. Orality and an oral culture are what’s needed to escape the Matrix. This is why Trinity’s kiss saves Neo from death. She speaks and touches with the same organ of orality, and the content of her speech is love, the power that drives all true communication. Neo’s final voice-over shows him telephoning the audience, asking them if they want to become real.

Posted by quantum retrocausality at 1:38 PM

Email ThisBlogThis!Share to TwitterShare to FacebookShare to Pinterest
Labels: REACH OUT AND TOUCH SOMEONE Marshall McLuhan 1979