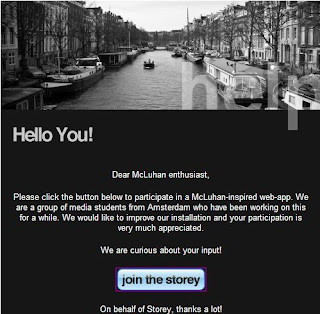 "Join the story" links though to: http://storey.it/case/1/step/2
INVENTORY ITEM #2.
The Australian Broadcasting Corporation is marking the anniversary with a suite of special programs on ABC Radio National, culminating in a “pop-up” (temporary) radio station on ABC Digital on the weekend of July 23 and 24, which will include archival material and explore life in the present digital age.
We are also developing a special online space, which will include an interactive infographic depicting a timeline of McLuhan’s life, and the media and communications landscape from his birth until the present day (and into the future!).
We’ve kicked it off with some starter dates and events:
http://dragtotrash.com/misc/marshall/mcluhan/60th/
Now, this is where you come in.
As a part of this project, we would value your input on what you believe to be the best or most significant cultural phenomenon or events during this period of the McLuhan century (1911-2011), in any of the following categories:
We will be collating this data and incorporating it into the infographic.
Posted by Andrew Chrystall at 5:55 PM