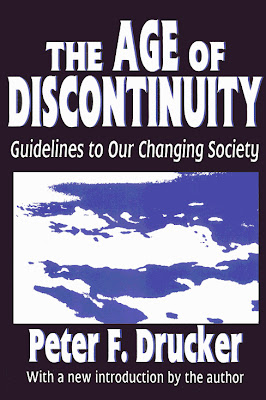 The Vienna in which Peter Drucker grew up had been a cultural and economic crossroads for centuries. It is only in recent years, with the discoveries of "quantum mechanics" and of "interface" as the principal of change and breakthrough, that we have begun to get adequate insights into the meanings of such cultural diversity. For example, the city planners have now recognized that blueprints would have been useless for creating the complex values that Vienna enjoyed and imparted to its citizens.

Among the many unique interfaces of Vienna is its peculiar situation as a "city in the country." One consequence of this feature is that Vienna has long been a kind of "country" itself. It was long the centre of the Holy Roman Empire. The recognition of the "ministate" as a major development in our century is stressed in Drucker's latest work, The Age of Discontinuity :

In 1900 there were fewer than fifty sovereignities in the whole world - twenty in Europe and twenty in the Americas, with the rest of the world having fewer than a dozen. ... Now we have more than one hundred and sixty, with new ministates joining the ranks almost every month.

Drucker implies, without asserting it, that the cause of this rapid decentralization and of the sudden creation of ministries is the speedup of the electric-information environment.

The Vienna in which he was born, raised, and educated included Byzantium and Germany, the East and the West, in its traditions. This is the reason why the perceptual training of the Viennese naturally includes awareness of the arts. To the usual range of familiarity with the arts, Drucker adds a special devotion to Japanese art. The Japanese are the great masters of "tactile space," the art of the interval. The Japanese art of flower arrangement is one of spacing rather than of connecting. The Japanese facility in the world of "quantum mechanics" and electronics is also most readily appreciated through their art. the every title of Drucker's Age of Discontinuity is thus an acknowledgment both of Oriental art on the one hand and of Western technology on the other hand.

It would be easy to dwell on the importance of this wide spectrum of sensibility and awareness as derived from Drucker's Viennese heritage. Son of a well-to-do and highly cultivated family, habituated to association with the great figures of that spheres - German, English, and American - with the easy assurance of a world citizen. It is important to recognize that an encyclopedic and international cultural background is indispensable for coping with life in the electronic age. Drucker, if anyone, is an example of the new relevance of ancient traditions in the present time.

His legal training was no digression from the banking and economic experience gained in his father's house. Even in the British and American worlds, law schools remain residual legatees of the oldest humanistic studies of the trivium and quadrivium. The Elizabethan man, or the encyclopedic humanist who is now returning to vogue in our time of new ecological awareness, originated in the Western world with the concept of the doctus orator.

The concept of resonance invokes the principle of auditory or acoustic space and interval. It breaks away completely from Euclidean concepts of conncetion and from all ideas of the continuum as the reality of the physical world. E. A. Bott, the psychologist, who spent his life studying acoustic space, defined it as "a perfect sphere whose centre is everywhere and whose margins are nowhere."

This designation of the physical properties of acoustic space concurs with the ancient Neoplatonic notions of God. The Logos idea of the Timaeus, or of the ancient world, East and West, took resonance for granted as the bond of being and the natural liaison between human speech and the entire physical world. It was resonance and the "logistics" of the Word that ensured to humanist studies absolute scientific priority in antiquity. Eloquence and wisdom were therefore synonymous to Greek and Roman alike - to mention only the Western world. It is this idea of unity in all knowledge and being that has suddenly returned to the Western world through such developments as quantum mechanics. The ecologist in all his manifestations today (the ECO crowd) is unwittingly repeating the ECHO world of then ancient Logos as well as of modern scientific resonance. The instant speeds of information in the electric age necessarily revive the characteristics of ancient resonance and harmony as the norm in all pursuit of knowledge and organization. No matter how fragmented the bureaucrat or administrator or specialist or institution or curriculum of our age, the overriding resonance of instant information pervades and permeates them all. With the most irrelevant intentions, the modern specialist is compelled to be integral:

The really significant fallout from the strains, traumas, and endless experimentation of Project Apollo has been of a sociological rather than a technological nature; techniques for directing the massed endeavours of scores of thousands of minds in a close-knit, mutually enhancive combination of government, university, and private industry.

Peter Drucker encountered the patterns of these ancient studies as latent in every area of his Viennese culture as well as in his economic and legal training. Paradoxically, it is in the forensic world of legal study that the encyclopedic tradition of Cicero's eloquent wisdom survives most vividly. It is thus perfectly natural that the preliminary of a political career in the Western world is still rooted in legal training. The encyclopedism of Peter Drucker was enhanced by many studies besides that of law; but mere addition can never account for a living core of vital principle. Drucker's comprehensive range and inclusive grasp of languages, philosophy, politics, and economic organization, or inclusive circle of learning, is not out of tune with the contemporary world. Such an eguklios paideia, the new education, may appear as a mere trend of out time, but is in effect as deeply rooted as our electric technology. The latter, with its recovery of the simultaneous and acoustic principle of organization, retrieves Cicero in the West, as the computer has retrieved the I Ching in the East.

Theodore Lipps pointed out long ago that the single clang of a bell includes all possibly symphonies and music. It is this inclusiveness and simultaneity of experience that reunifies the consciousness of our time. The same inclusive awareness is utterly at odds with the enormous backlog of fragmented studies and classified data accumulated over the recent centuries of visual organization.

It was easy for the widely versed Drucker to be a pioneer of contemporary business study as soon as business itself became deeply involved in the knowledge industries. As modern industries required more and more knowledge (as contrasted with mere craft experience), the Druckers became indispensable to the functioning and programming of business.

Drucker has called himself "an unlicensed psychiatrist" of modern business. His fellow Viennese, Sigmund Freud, applied modern psychiatry at a time when organization of the human family was collapsing under the impact of modern industry. (See E. R. Leach, Runaway World). Drucker has accepted the role of putting the outer structures in order, just as Freud attempted the same task for the inner life.

It could easily be shown that Drucker's activities and interests are representative of a much wider part of the Viennese spectrum of culture and organization than those of Sigmund Freud. Freud and his followers discovered that the world was full of people who had problems and no audience. They also discovered that these people were happy to pay very high fees to anybody who would listen to their problems.

Posted by quantum retrocausality at 12:22 PM

Email ThisBlogThis!Share to TwitterShare to FacebookShare to Pinterest
Labels: Marshall McLuhan The Man Who Came to Listen ... 1971 ... King Spider Walks The Velvet Roof Of Streams