Menippean Topics: Gibberish to Inability to Edit Anything Out (Feigned, of Course) 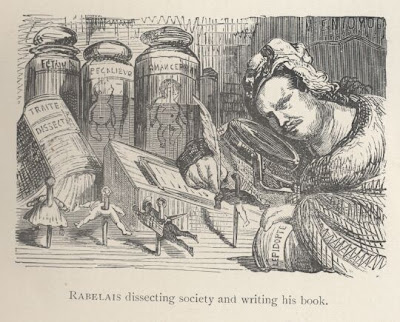 Gibberish. Properly one of the language topics, this includes nonsense words, phrases, sentences or paragraphs. The result can be hilarious. E.g., the scholarly labor thus far expended in attempts to decipher the "languages" in Gulliver's Travels are a Menippean "side effect" of that satire whereby the scholars' efforts and reports become an additional "chapter," in which they satirize themselves unwittingly and unmercifully (because they're not playing). Users range from Rabelais' "Corrective conundrums" (Gargantua, 2: gibberish punctuated by gaps), to Lewis Carroll's Jabberwocky, to Finnegans Wake, which some critics argue is entirely gibberish, "a monstrous joke."

Glosses. This topic embraces fake glosses, false erudition, irrelevant glosses, and includes similar play with footnotes and other marginalia and "editorial" digression from the text. Examples: Lyly, The Owle's Almanacke (mock-serious marginalia), Swift, Dunton. Sterne used a variation by putting his characters into tableaux (his "Shandean way of writing") for sentences, paragraphs or even chapters at a time, so he could mount digressive hobby-horses. Joyce used it all in the "Triv and Quad" chapter of the Wake. Often fake and real are interspersed, leaving matters to the reader to sort out. Swift glossed the Tale with one of the Tale's critics' remarks. This topic is clearly related to Digressiveness.

Groping. There are several forms: one is for the "mot juste." Alternatively, the author either pretends to have lost his way, perhaps due to digressions, and to be unable to find it again (often in Sterne); or he pretends to reach for the ineffable and to lose it, while remarking to the reader that in any case no direct understanding is possible. Korkowski points out (p.281) that Beroalde goes a stage further in noting that his own work, which admits only of being a "moyen de parvenir" and not an actual arrival, "is more honest than other books which offer definitive statement but no comment on the lack of ontological certainty in reading and language":

Honesty. "I promise you purest truth," followed by whopping lies. A basic and frequent topic, this includes all the varieties of misrepresentation, misleading and fakery. Lucian's True Story is the touchstone.

How to Read the Book. The reader is given clues or instructions by the author. A feature of most Menippean satires. E.g., Sterne Vol. I, ch 13 (instructions promised), Rabelais, Byron, Joyce.

Inability to Edit Anything Out (feigned, of course). This is related to such other topics as Catalogs and Encyclopedism. Examples: Harington, Sterne, Nashe, Swift. 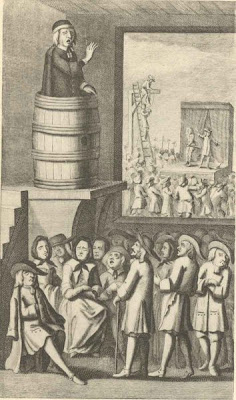 Email ThisBlogThis!Share to TwitterShare to FacebookShare to Pinterest
Labels: Menippean Topics Gibberish to Inability to Edit Anything Out (feigned of course)