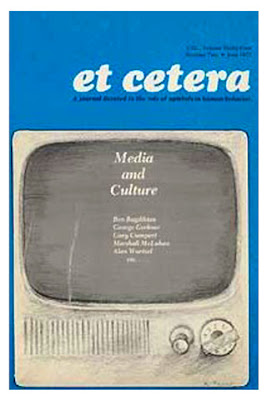 "These ratios also extend to the four irreducible relations in technology. For example:

1. THE LAWS OF EQUILIBRIUM :

(A) Any input amplifies or intensifies some situation (inflates)

(B) Obsolesces existing homeostasis or balance

(D) When pushed to its limits, the system reverses its modalities

(A) Enhances awareness of relations

(C) Retrieves understanding, "meaning" via replay in another mode

(A) Intensifies and crystallizes percept - as word (thing)

(B) Obsolesces the merely sensory via perceptual interplay

(C) Retrieval: transference of power from things to word-as-vortex

(D) Reverses into the conceptual (replay of meaning-minus-the-experience )

5. SPOKEN WORD (mirror of the mind: CANON is mirror of the voice, when one voice repeats or reflects what another has stated) :

(A) "Speak that I may see thee." (Title of book by Harold Stahmer)

(A) Intensifies the new

(B) Obsolesces the merely vocal

(A) Enhances ego by repetition and self-advertisement; echo-matching of a figure-MINUS-its-ground; instrument for SELF-portraiture (Rembrandt, etc.); adjunct of phonetic literacy via visual intensity; (print has the same effect for the user - i.e., self-advertisement)

(C) Retrieves the mode of Narcissus (magic, metamorphic tunnel vision); mirror as sitter, painter as audience and as admirer

(A) Amplifies private authorship, the competitive, goal-oriented individual; (letters are an extension of the teeth, the only lineal and repetitive part of the body; as Harold Innis explains, writing on paper leads to military bureaucracies)

(D) With flip from manuscript into mass production via print, there comes the corporate reading public and the "historical sense"

(A) Enhances simultaneous access to the entire planet: "On the air you're everywhere!"

(B) Obsolesces wires and cables and physical bodies; end of rational and lineal; end of Euclidean space; end of Western Time and Space

(C) Retrieves tribal ecological environments - trauma, paranoia, and the primacy of the right hemisphere of the brain; (radio was the hidden ground to the figure of the retrieved Prohibition of drug abuse in the television age)

Posted by fivebodied at 4:25 AM