INVENTORY: “Early Media Prophet Is Now Getting His Due” 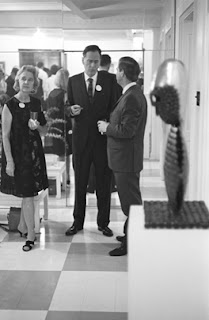 OTTAWA — By the time Marshall McLuhan died in 1980, the once provocative voice that had propelled him to international stardom rare for an academic had been silenced by a stroke. In his home country, Canada, he had become something of a national embarrassment, often seen as an eccentric at best, a charlatan at worst.

All seems to have been forgiven. Last week events in Europe, Washington and three Canadian cities honored the centennial of the birth of the man who is now widely credited as the world’s first media theorist and who introduced ideas like “the medium is the message” and “the global village” into everyday use. The festivities have helped renew debate over the meaning of his often dense and cryptic, yet challenging, work.

Instead of being viewed as an academic fraud, McLuhan is now widely celebrated as the man who prophesied both the Internet and its impact on society.

“The resurrection of McLuhan has a lot to do with the eerie prescience of what he said,” said Prof. B. W. Powe, an author and English lecturer at the York University in Toronto and one of the organizers of a weeklong series of events in that city. “We read the 21st-century media through his eyes.”

While Professor Powe, who was a student in the last class McLuhan taught at the University of Toronto, and others never gave up the cause, it was the rise of the Internet during the 1990s that again brought public attention back to McLuhan’s work. His theory that media are essentially interactive — “we shape our tools, and thereafter our tools shape us” — appeared to have been vindicated by the Web. When the magazine Wired made its debut in 1993, it declared McLuhan to be its patron saint.

McLuhan’s profile has yet to regain the level it achieved during the 1960s and ’70s. His 1967 book, “The Medium Is the Massage,” written with Quentin Fiore and whose title was a play on his own aphorism, was a best seller.

He regularly appeared on American television, often delivering remarks that seemed obscure or tangential. On “Today” in 1976 to discuss a presidential campaign debate held the previous evening, McLuhan made no reference to any remarks by either candidate. He did, however, observe that “Ford looks very much better on black and white than on color.” And of course he made a famous cameo in “Annie Hall,” appearing alongside Woody Allen’s character to denounce a pretentious moviegoer.

While much of what McLuhan forecast has apparently come to pass, understanding him has not become any easier. The author Douglas Coupland (“Generation X: Tales for an Accelerated Culture”) recently read all of McLuhan’s books after he was commissioned to write a short biography of him. But Mr. Coupland found the material so difficult that every two to three pages, he had to take a break from reading.

He has no regrets, however. The task, he said, “opened me up.” But he did suggest that because McLuhan preferred talking to writing, many people might find online videos a more accessible way to explore his ideas. Mr. Coupland spoke at an event at the Newseum in Washington last Thursday, McLuhan’s birth date, which relied heavily on videos from the Web site Marshall McLuhan Speaks.

While he may have been the prophet of the Internet, McLuhan was also a convert to Roman Catholicism who attended Mass daily and who was ambivalent about technology, if not hostile toward it. He taught Renaissance rhetoric at the University of Toronto. His unconventional approach to scholarship, however, made his relationship with academia uneasy.

Professor Powe was actively discouraged from taking McLuhan’s class by other members of the English department’s faculty. McLuhan later recommended removing his name from the acknowledgment in a master’s thesis by his former student. Professor Powe did not do this, and spent much of his time defending McLuhan rather than the paper’s contents.

At the university too, all is forgiven. McLuhan’s studies created the foundation for the university’s current McLuhan Program in Culture and Technology, which hosted several of the events leading up to last week’s birthday celebration. In November the center will also organize an academic assessment of his work, titled “McLuhan 100, Then, Now, Next.”

Mr. Coupland and others believe that a brain tumor and a series of small strokes harmed the quality of McLuhan’s later work. Now, Mr. Coupland said, McLuhan is increasingly being known for his ideas again, not his celebrity.

“What I find gratifying is there are younger people out there who aren’t sure about what he was saying but know that he was right about something,” Mr. Coupland said.

By I. Austen for The New York Times. Published: July 25, 2011. A version of this article appeared in print on July 26, 2011, on page C1 of the New York edition with the headline: Early Media Prophet Is Now Getting His Due.
Posted by Andrew Chrystall at 5:36 PM