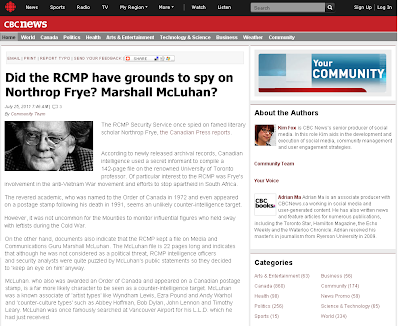 Posted by quantum retrocausality at 11:10 AM

It was at MIT, they set me up with a job and a dorm room for the summer in 1971. I never found out who arranged this, but they obviously wanted a murder solved. Karen and I are telepathic, and she had me get in the habit of riding my bike around the esplanade, starting at the stairs leading down from the Boston University bridge. On a Saturday night around midnight in early June, I met some people at the stairs, they were also investigating the murder; they said someone had a gun and I should go find a cop. That took me fifteen minutes, and he wouldn't investigate. I decided to forget the whole thing and went home. The next morning at six I found the body, she was sitting up with a stocking tied around her neck to a bench. I called the police, and told them I didn't want to be involved any further. The cop said he thought I was much more involved.

That summer I had been sent to the Russian recruiter to see if I could become a KGB agent. He asked about my political affiliation to the international democracy movement, and said I couldn't. Then I was sent to meet the FBI at two on July 27. It was about if I had been raped and was resisting hypnosis. They used scopolamine and a polygraph to break down my resistance, and I and all my girlfriends got raped and knew it. And they had me investigate the communists. In 1977, the communists at MIT and Harvard did what they called the split brain experiment on me; my boss pushed a pressure point on my spinal column, which lowered my resistance to their hypnosis. I thought they'd get caught doing this. By February 1979, I completely lost control of my mind and spent the next 24 years living on the street. And finally, in 1985, I was reading the Boston Globe about a murderer who had gotten out of prison for a murder in 1971 at the Boston University boat house. See www.masscases.com/cases/sjc/385/385mass497.html

In 1969 I had been recruited to be a shadow telepathic agent of the NSA. To read about these people see www.acsa.net/paranormal_agents_at_the_nsa_by.htm; my web site on this is www.agentcounterspy.com. They sent me on a mission to MIT to solve this case. The news article said that the body had been found with a lot of blood under the Boston University boat house, and that the “murderer” had been caught on an anonymous tip leading to a bloody diner jacket found in a church. I think this “murderer” was the guy who told me to go find a cop. The body I found was probably an investigator for the murder. Lark Elaine Turner might have been there also, investigating. As I understand it, decades later, the motive was to blow the cover of the counterintelligence agents to the criminals taking over the government by mass hypnosis, after the Kennedy assassination. But this played into our strong suit, who are they anyhow if they're blowing the cover of counterintelligence; they'de have to be the spies.