PROBE: The Satellite Ensures That Our Future Relationship With the Planet is One Of 'Program' 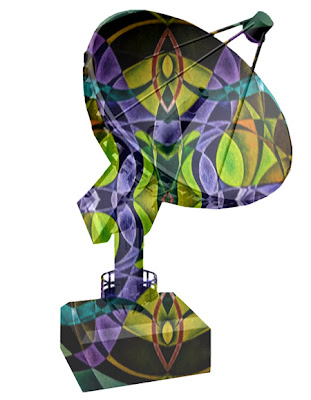 The satellite medium, McLuhan states, encloses the Earth in a man-made environment, which "ends 'Nature' and turns the globe into a repertory theater to be programmed." All previous environments (book, newspaper, radio, etc.) and their artifacts are retrieved under these conditions ("past times are pastimes"). McLuhan thereby meshes this into the term global theater. It serves as an update to his older concept of the global village, which, in its own definitions, can be said to be subsumed into the overall condition described by that of the global theater.

"Rapidly, we approach the final phase of the extensions of man - the technological simulation of consciousness, when the creative process of knowing will be collectively and corporately extended to the whole of human society, much as we have already extended our senses and our nerves by the various media.(p.19)... For with the telegraph, man had initiated that outering or extension of his central nervous system that is now approaching an extension of consciousness with satellite broadcasting."(p.222)

Marshall McLuhan,
Understanding Media: The Extensions of Man,
pp.19 and 222, 1964.
Posted by quantum retrocausality at 7:22 AM

Email ThisBlogThis!Share to TwitterShare to FacebookShare to Pinterest
Labels: TETRAD ON SATELLITE ... satellite ends Nature global village updated to global theatre ... ALL past times are pastimes