Master-Clue to all Future Government 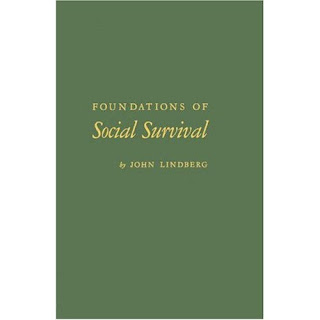 …Myths are for Lindberg the traditional religions imposed on men. They are products of reason. They are expedient lies. They are the means of curbing the monsters bred of men's passions. Norms or moral conventions, on the other hand, are merely a cinematic projec­tion on the screen of the city of the passions and preferences of men. Myths are vertical affairs imposed by ruling authority on the ruled. Norms are horizontal developments spreading outwards in accordance with men's desires. Myths are static. The authoritarian myth-built city is local, brittle, easily susceptible of shock. If one myth falls, all will tend to fall. But the norm-structured society is open, elastic, malleable, receptive of change. Under current conditions of communication the static, myth-built cities of the Western world are doomed, says Lindberg. The foundations of social survival are, however, to be found in a switch from reason to passion, from fear to love. And the possibility of the switchover resides in our capacity today to discover the creative dynamics of norm-making. Norm, the region of passion and flux, was no basis for any past city. But norm seen as a product of an individual and collective creative activity may be a clue to a new social dynamics …. And it will perhaps amuse Lindberg to learn that his book [The Foundations of Social Survival] is the best introduction written to date to Joyce's Ulysses and Finnegans Wake. -- McLuhan, H. M. 1954. "The God-Making Machines of the Modern World."

Posted by Andrew Chrystall at 4:01 PM