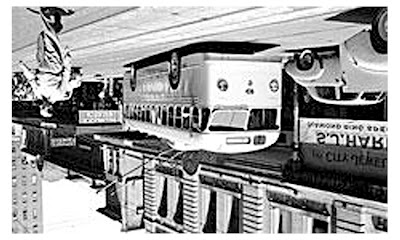 "Although it has not been specially studied, there is still the mystery of the Stratton glasses which draw attention to the human habit of turning the world right-side-up, although, in fact, we receive it on the retina upside-down. When first put on, the Stratton glasses turn the world upside down for the wearer. However, after a few hours the wearer finds that the world flips right-side-up again. Then, when he removes the glasses, the world goes upside down again and remains so for a few hours. It was this factor that prompted my question to Al Sheppard, but it appears that sensory psychologists have not studied the Stratton glasses effect in outer space where a state of weightlessness makes right-side-up meaningless.
I want to draw attention at one to a similarly drastic reversal of figure-ground conditions for all of us at the present time. Electronically, we live in a world of simultaneous information in which we share images that arrive instantly from all quarters at once. If acoustic space is a sphere whose centra is everywhere and whose margin is nowhere, this character of acoustic space now extends to all information structures experienced in environments constituted by electric technology. That is, Western and civilized man long accustomed to private and individual outlook and similar legal and political structures, now finds himself acoustically environed. It is as if the little boy in the aeroplane cabin were suddenly to experience himself situated in a boundless and silent surround, "wishing upon a star," as it were. The orientation of the visual man, with his private outlook and individual point of view and personal goals, would all seem to be somewhat irrelevant in the electronic environment. There is another feature of this simultaneous environment with its instant access to all pasts and all futures alike, communication takes place not by mere transportation of data from point to point. It is, in effect, the sender who is sent, and it is the sender who becomes the message, as it were.
The electric and simultaneous world began to manifest its patterns and influences on our awareness by the middle of the 19th century. There is a strange property about innovation and change that can be stated by saying that effects tend to precede the causes. Another way of putting it is to say that the ground tends to come before the figure. In a recent issue of Scientific American (March 1973) the piece on "Bicycle Technology" explains how "the bicycle quite literally paved the way for the automobile."

from - Marshall McLuhan, Reading and The Future of Private Identity
Posted by quantum retrocausality at 11:11 AM

Some illustrations of the sender being sent by the message.