4chan's Chris Poole: Facebook and Google Are Doing It Wrong 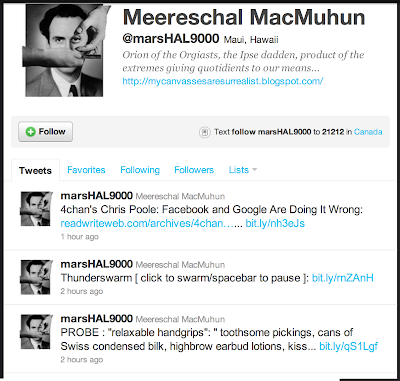 Chris Poole delivered the most powerful 10 minutes of Web philosophy of the afternoon at Web 2.0. The man formerly known as moot - founder of anonymous image sharing den 4chan and its new, better-lit cousin, Canvas, gave us a rousing and principled picture of what the big players get wrong about online identity.

"Google and Facebook would have you believe that you're a mirror," he said, "but in fact, we're more like diamonds." - multi-faceted. It was an appeal reminiscent of the one he gave at SXSW earlier this year, but it hit harder. Google Plus has since arrived, and Poole says it's even worse than Facebook for the future of online identity.

Posted by quantum retrocausality at 10:22 AM