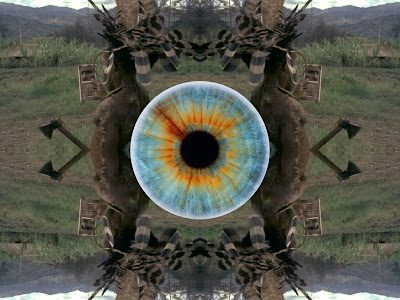 THE CRACK IN THE REAR-VIEW MIRROR

In The Secular City, by Harvey Cox, the principal theme concerns the power of the Judaic and Christian revelation to enable men to avoid participation in the world environment. Without this revelation, men have tended to adjust them- selves by what Levy-Bruhl called "participation mystique." Involvement in depth in the patterns of one's culture we have come to consider a natural response to one's environment, a sort of conditioning by adjustment. These matters are rehearsed in Saving the Appearances by Owen Barfield. He is especially interested in the non-participation attitude of literate societies. What he calls the "Alpha-thinkers," the detached, analytic observers of events, are in striking contrast to the "Beta-thinkers." The latter are simply people who make a corporate, or collective, response to environments by which means they acquire a sort of "sensory profile" of which they are quite unaware. The Beta-thinkers Earfield associates especially with native societies whose unified and corporate outlook goes along with a great deal of depth involvement in the natural and cosmic realities that surround them.

Mircea Eliade, in The Sacred and Profane, tackles the contrast between the Alpha and Beta thinkers in quite different spirit. He is nostalgic about the people who are able to experience the participation mystique. They live in a sacred space and time where nothing is neutral and where no detachment is conceivable. By contrast, Western literate man, since the rise of the Greek phonetic alphabet, has known little participation and much alienation and detachment. The above authors share a common lack of awareness about the power of the phonetic alphabet, especially when printed, to impress habits of perception that are very detached and objective and alienating.

The sensory environment created by this alphabet with all it entailed of high visual orientation and pervasive habits of fragmentation and specialism and classification receives real attention from Eric Havelock in his Preface to Plato. This book was not available when I did The Gutenberg Galaxy and Understanding Media. It is the work of a classical scholar who looks in detail at the kinds of culture and education that characterized the world of the tribal encyclopedia that preceded Plato.

Quite apart from the admirable introduction to the world of Homer and Plato that Havelock affords, he also provides invaluable insight into the new worlds of culture and education created by electronic technology. Havelock does not refer to electronic technology, he simply presents the oral and tribal culture of Greece with a detail that makes it quite easy for the reader to provide his own interrelationships between the tribal world and our electronic society. As Miss Susan Sontag shows in her chapter on "Camp" in Against Interpretation, the entire environment of our time has become valuable as a work of art. "Camp" is seeing our entire society in quotes, as it were. When we have stretched instant electronic webs around the globe, aIl the cultures of the world, past and present, become simultaneously accessible. The world becomes a Museum Without Walls. What the young "beat" poets now call and provide as "Happenings" is a preliminary view of our world as we begin to encounter it once more in a participation mystique. To regard the entire world of natural and artistic events alike is a unified cosmic Happening, to see supermarkets and used car lots as the treasures of an ideal Museum is to respond to electronic technology in the truly tribal and involved way of the "Beta-thinker." 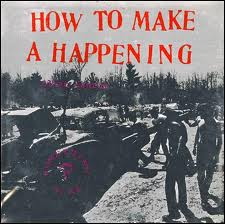 Depth involvement comes with the decline of visual orientation.It comes with the end of the monopoly of the visual power that long held sway under the ages of the phonetic alphabet. Today, xerography is about to increase the number of written words and printed books in the world by manyfold, but xerography is the antithesis of letters and typography. It deals with the page and the book as a single gestalt. With xerography the reader can become once more like the ancient scribe, both author and publisher of anything that interests him. Xerography ends the central position of the publisher and ends the role of author as one seeking self-expression. The book is about to cease being a vehicle of self-expression, and is about to become a corporate probe of society.

AIl the facts and effects of xerography so far as they concern the future of the book, were patent to Rimbaud and the poets that followed, including Pound, Eliot and Joyce. The poet has invaluable power to translate the sensory meaning of the new technical environments into new art forms that foreshadow specific changes. The urgent effort of the poets to gain a hearing for their intuitions is always lost on the public. Today the public is more likely to pay heed to announcements that R.C.A. and Random House are merging their activities, or that I.B.M. is likely to become a major text-book publisher.

Paul Goodman's book title Growing Up Absurd means that young students today have already adjusted to the new world of electric circuitry. The absurdity in their lives consists in being instructed and guided by people for whom the receding mechanical and fragmented world is the prime reality. It is as though astronauts could only be launched into space by veterans of the Boer War. Now, none of these matters has anything to do with ideals or goals, so far as I can see. When I say "the medium is the message" I am merely expressing the obvious fact that the means employed in any human endeavour will directly affect the ends to be achieved. Perhaps the reason that the ends and means discussion never got off the ground was that the earnest moralists who carried on that discussion never paid any attention to technology. That blind- ness still persists among educators who imagine that they can pursue the old ends by the new means. Personally, I am not the least attracted to any of the new technologies except in so far as I can see quite clearly that they threaten our entire way of life. The only conceivable defence against the distorting effects of the new environments created by new technologies is a patient and total understanding of their powers and influences.

To express moral caution and alarm concerning such matters is as efficacious as the screech of a chicken whose neck has been laid on the chopping block. If, for example, our engineers were to add 200 lines to our present TV image, a real step would have been taken towards maintaining some of our visual and cultural values. Colour TV, on the other hand, greatly lowers the visual orientation of the TV viewer; that is, it decreases his detachment and increases his involvement. It appears to be a fateful sensory trait of mankind that he be quite unaware of the environmental, while always having a vivid image of the preceding environment. The revival of Bat Man is a case in point. Much of the present TV audience and executive world read Bat Man in early adolescence. With the advent of colour TV, Bat Man returns as a nostalgic image of the pastoral world of youth. There are other reasons for this revival that are also associated with colour TV. Now that TV is an environmental force, we are free to be nostalgic about the glorious artistic achievements of the movie.

When the Middle Ages had departed, the Elizabethan world picture became a medieval one. When the mechanical industry, and railways, had created a new environment around the old arts and crafts and the agrarian world, nostalgic image of the departing society became the basis of the Romantic Movement. The more mechanized and urbanized America became, the more flamboyant became its Bonanzas, and its Westerns. But human power to deal with any present reality is minimal. To have discovered this is a huge step toward by-passing this human limitation. In the jet age there are some indications that the rear-view mirror as a notification device is losing its monopoly. 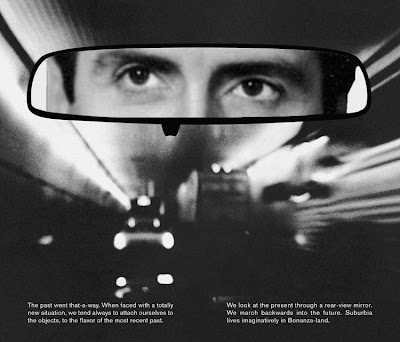 Posted by quantum retrocausality at 8:46 AM

Email ThisBlogThis!Share to TwitterShare to FacebookShare to Pinterest
Labels: THE CRACK IN THE REAR-VIEW MIRROR McLuhan 1966 the rear-view mirror as a notification device is losing its monopoly