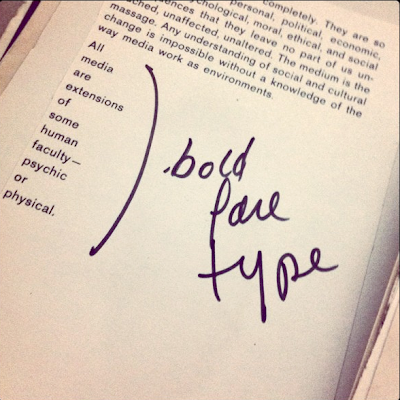 Walter Glanze: “though I wasn’t based in New York until the following year, I believe that the process was not unlike that followed in War and Peace [which I experienced first hand]: Jerry would sketch out units, draw up questions, assemble and edit textual fragments from McLuhan and other sources, as well as generating copy of his own, which he submitted to McLuhan for approval before sending them on to Quentin. At a second stage, Quentin added his own materials and touches, both visual and verbal, in the process of roughing out page layout sequences which were then worked over with Jerry. These were then submitted to McLuhan, who, naturally, had the right of final approval.”

Eric McLuhan: “As I recall, Jerry proposed the book and he and Dad worked up a list of topics. That list became the head[ing]s in the book. Jerry started the list; Dad added to it and revised it and so on. Dad then took the list and wrote a small essay under each heading. I was present at several meetings between the three of them. Those meetings always went smoothly and amiably. Quentin was quite professional about his work, not the emotional artiste; so he was easy to work with. Jerry, too, was full of suggestions. Consequently, meetings tended to become lively idea sessions, until Jerry broke in with an item of business.”


The style of UM had been deliberately chosen for its abrasive and discontinuous character, and was forged over many redraftings. It was designed deliberately to provoke the reader, to jar the sensibilities into a form of awareness that better complemented the subject-matter. This is a poetic technique … of a high sort – satirizing the reader directly as a means of training him.

"The artist is engaged constantly in building anti-environments... The artist is engaged typically in creating situations and images that will vivify or revivify the ordinary scene. The ordinary scene tends to dull and numb the sensibilities. If you think of art as primarily concerned with perception and awareness, you can easily see why, when ordinary routinized forms tend to numb awareness, the role of art is to keep faculties alert." 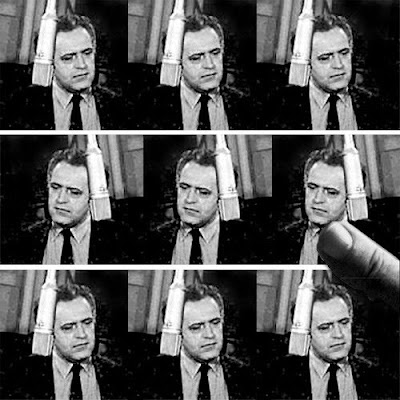 Quentin Fiore on 'Conscious Mediumship' : "consciousness can be affected by the knowing collision of verbal and visual information."
Posted by quantum retrocausality at 10:54 AM