PROBE : "start with an earthquake and work up to a climax." 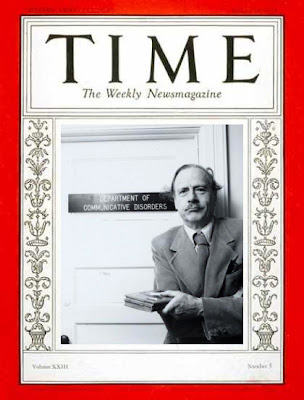 'The way to make a film," said a Hollywood producer, "is to start with an earthquake and work up to a climax." The story of Time Inc. follows a somewhat different pattern. It proceeds through some rather interest- ing narrative for two hundred pages or so, and then peters out into vague editorializing.

For the media student there is lots of grist in this book. Hadden and Luce, the co-founders of Time and Life, were both hot jazz babies right out of the 'twenties. They both attended Hotchkiss, where they picked up a good deal of the epithet style of Time from their Greek classes. "Soon, in imitation of Xenophon, Time's account of President Harding's journey to Alaska, entitled 'Anabasis,' began: 'Forth from the White House followed by innumerable attendants, Mr. and Mrs. Warren G. Harding set out. . . . ' When the party turned homeward the head was changed to 'Katabasis.'" Homeric epithets became frequent - President Francisco Madero of Mexico was "wild-eyed,"the World War i German Admiral Alfred von Tirpitz, "long-whiskered."

Time began using the middle names of prominent people to satisfy reader curiosity, but surprisingly, said John Martin, the effect was some- thing like "undressing them in Macy's window." The same rhetorical features extended to "nicknames in parentheses .... the tennis champion Helen ('Poker Face') Wills; the publisher of Physical Culture Magazine, Bernarr ('Body Love') Macfadden. Then came the reiteration of identifying phrases; the senior senator from Alabama was always 'James Thomas (Tom Tom') Heflin, who mortally hates and fears the Roman Pope,' and Senator Henrik Shipstead of Minnesota was 'the duck- hunting dentist.'""... George Bernard Shaw was 'mocking,mordant, misanthropic'"; "Ludendorff was 'flagitious, inscrutable,unrelenting.' "Yale-boy Buckley revels in these polysyllabic resonating fragments of Macaulay. Harry Emerson Fosdick was etched as if in Greek celatura: "his face was paunchy, his black knitted hair gave an unkempt appearance. His voice, too, retained the flat tones, the slightly nasal twang of upstate New York."Robert Elson points out that "behind this insistence on physical description was a method, as Luce described: 'No idea exists outside a human skull - and no human skull exists without hair and a face and a voice- in fact the flesh and blood attributes of a human personality.'" Time put numerous words into new popular usage, e.g. the Japanese "tycoon,"or "great lord" and "pundit."

Elson is very useful in filling in such data as: "One of Time's important innovations was the use of historical background."A propos the Crimean war when one of Hadden's writers couldn't get the meaning of his assignment, Hadden snapped: "Tell 'em all about it - tell 'em what duh Crime was." Hadden, who was a stickler for propriety, affected the manners of a Brooklyn bum.

Part of the excitement of the story is the financial crisis and also distribution hang-ups, as when "Larsen had hired several of Hadden's debutant friends to prepare the mailing wrappers for the magazine."

The whole key to Time style was capsule and summary, "paring every item to the marrow. . . . This contributed to the magnificent dead- pan quality of early issues." One of the reversals occured in 1938 when the success of Life magazine wrecked Time magazine by lowering its advertising revenue. There are many great moments, as when Time made Hitler the "Man of the Year" and invented the phrase "Warn." It was during this time that the United States, unaccustomed to thinking about world affairs, became the centre of the world - the "eye" of the whirlwind, if not the brain.

Marshall McLuhan
University of Toronto
Posted by quantum retrocausality at 9:42 AM

Email ThisBlogThis!Share to TwitterShare to FacebookShare to Pinterest
Labels: Inc. ... start with an earthquake and work up to a climax, McLuhan Book Review of TIME